With the closure of the Atatürk Airport, at least 90 hotels in the region will be tendered. While most of the facilities in the region have been made due to AHL in the recent period, it is said that these facilities are faced with crisis by 4 billion dollars of investment.

World newspaper writer Ibrahim Ekinci, brought around 90 hotels around the Atatürk Airport. Reminding that Ataturk Airport will move on October 29, Ekinci said, "I counted 90 hotels in the 3-4 km circle of AHL. Of these 29's name is "airport hotel" extension. On the road from Küçükçekmece to Torium AVM, there are 18 hotels in the vicinity, 11 in the direction of Merter on the E5 and 5 more on the beach towards Zeytinburnu. In total, the number of hotels that receive customers from the airport is around 125! At least 60-70 of them are investments in the last 10 years. It was made entirely for the airport and the fair district, "he wrote

But the airport is moving! What will happen now? TÜROB is also looking for a solution to this problem. He's in preparation for a report these days. In numbers, the vacancy that the airports will be created in these hotels by the statistics of accommodation will reveal the problem. The first finding is that these hotels provide nearly half of their customers with "proximity to the airport". Half of the 230.4 million euros in 2017 is from this source. These hotels are called "crisis". TÜROB had a meeting with the managers of 62 hotels in the region. "The closure of the AHL will mean a crisis for the region's hotels, which has an investment of about $ 4 billion, contributes 500 million euros to the economy, and works for close to 50 people," the statement said.

TÜROB admits that some feasibility mistakes have been made and that too many hotels in the region have opened very shortly. TÜRBB President Timur Bayındır, hotel owners after the meeting held at the Polat Hotel, said in a statement, "But once done. Now we need to find solutions to make sure these investments are not wasted. I would like to draw attention to the fact that most of the hotels in the region have Airport kelimes. After 3 months, Ataturk Airport shut down, there is a risk of leaving the area empty. In the meantime, unfortunately, we see that the new hotel projects in the region continue to increase, "he said.

Now what should be done to keep these hotels standing, making money, and continuing to generate added value? TÜROB the most remarkable proposal, AHL necessary to stay well clear ... 3. Airport, Istanbul, Turkey does not specify doubt on the contribution. However, since there are 3 airports in a metropolis like Istanbul, it is noted that there are 6 airports in London and 6 airports in Moscow. 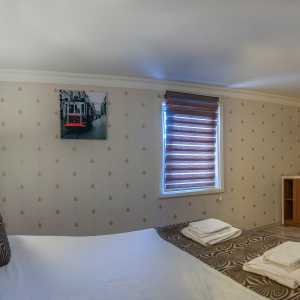